Being Julia Child or Rather Julie Powell

How many of you have read “Julie & Julia”? How many saw the movie? Quite a few, thank you… so I bet you guys remember the scene where Julie was trying Beouf Bourguignon and fell asleep as the dish was sitting in the oven, right? I’ve been craving this dish for a while and that’s from where the inspiration came. As usual the national holiday came upon me and since I worked late a day before I really didn’t think about food at all. After raiding the pantry, fridge and deepfreezer I was pleased to find enough onions, beef, carott and wine to try sth what was bugging me for a while.  Grabbed my findings and a pressure cooker, which is my new best friend, and headed to the kitchen. Smeagol, who has a taste for beef made an appearance at her bowl, and kept on giving her best meowing impression ever… this girl knows that there’s nothing better than a good chunk of fresh beef 😉 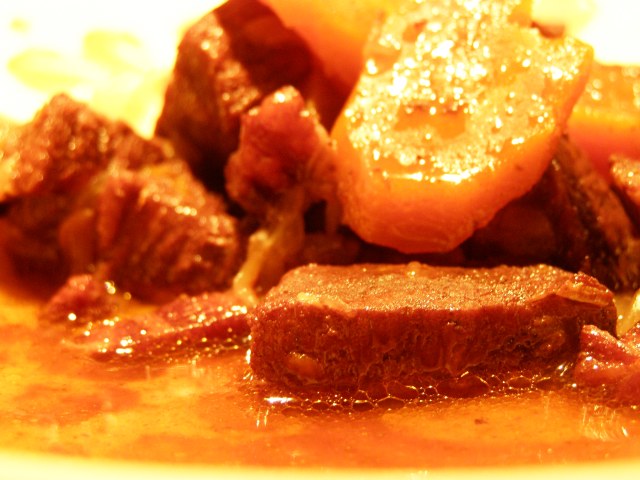 The recipe is inspired by the famous Beouf Bourguignon from Julia/Julie Project. I didn’t have all ingredients and I cooked in pressure cooker, but it’s ok… it’s more a variation and not an attempt on the actual recipe. The dish came out nice, with plenty of tasty wine sauce which to our surprise came practically clear, but the wine was red! Go figure… There was too much liquid, that needs to be remebered… of course it was my second time round with the pressure cooker, so I’m still learning! In the recipe here listed I cut the amount of liquid for your cooking pleasure. The access of sauce was frozen, as it makes perfect base for other dishes – it’s very meaty and winey 😉 The dish was gone in a blink of an eye, so was the loaf of bread. Historian was loudy complaining about too much sauce and why were we dipping the bread into it, thankfully he had no understanding from the gathering which fought till the last piece of bread for another spoon of sauce. My family can be very French indeed and not fussy at all!

Fry onion on olive oil and a spoonfull of butter, put it nicely as a first layer in pressure cooker. Then fry the bacon, save the fat and put it as a second layer. Spread a pinch of salt over that. On the bacon fat and some olive oil fry quickly the beef until nice and brown. Put over the onions and bacon. Add few corns of pepper and juniper. Now give a quick fry to garlic, ginger and carrots and cover the meat with them – spice with salt and pepper. Add few corns of pepper and juniper again.Pour in 300ml of red wine. Close the pressure cooker, proceed according to the manual. Cooking time is 40 mins.

So it’s easy and quick and tastes good. I was really happy with the outcome. The troible started when I tried to take pics. Right now with the “winter time”, not only the days got gloomy but as well the light is a complete screw-up. So after long and painfull battle, where my food got cold and I got upset – two pics were usuable…. bollocks to that! I spent the whole evening looking for a basic studio equipmet, as I really can’t have that every time I cook. The search for studio equipment ended up first with a row with Historian, who thought I went nuts, secondly with me buying what I wanted and him going home highly annoyed… oh well… bollocks to that! And here I want to thank a friend, whom I mention here often, for halping me out with the photo-stuff. Mr D, allowed me to brag about equipment, forcing him to read endless articles on food photography… and I got him talked into starting a food blog. So I’m so excited for him and waiting for the moment when I can make a big announcement! Thank you for being such a sport! Another good news is that new oven has arrived and it means – bread baking next weekend 🙂 plus most of my cookbooks came in mail, so I’m a happy bunny.

I'm a redhair girl witch to some scientist to the others... I love cooking and baking.... what else would you like to know?
View all posts by ladymorgiana →
This entry was posted in beef, bread, food talk, ginger, Julia Child, Julie Powell, pressure cooker, recipe, stew, wine and tagged beef, ginger, Julia&Julie, pressure cooker, wine. Bookmark the permalink.

4 Responses to Being Julia Child or Rather Julie Powell