Comfort food is diary to me, always and on every occassion when I’m unwell, unhappy or simply ill. Cheese and buttermilk, curd cheese, hard cheese, soft cheese you name it. I’m not allowed much milk on its own during the winter time (because it seems to influence badly sinuses, which are the chief villain of mine and source of most infections), but milk perserves are allowed. I’m especially fond of buttermilk and kefir, which is very much typical for Eastern Europe. They are light and very milky but as well a bit sour which gives lovely smoothness with a bit of bite to it. I adore milk shakes from butter milk or kefir with season fruits such as berries, bananas (all year long), peaches or appricots… so lovely and light and very good for your body.

On wednesday I got 2 pints of buttermilk and has been drinking it for comfort, and using it in cooking as I seriously appreciate its taste. And this morning I woke up with craving for french toast or bread pudding. Probably because I’ve been reading the Tastespotting madly those days. Seriously the only thing I could sort of focus on when sick. I decided to use slices of the sweet yeast cake, which is quite popular in Poland as chałka, which is quite similar to Jewish challa bread or to brioche, but less buttery and lighter.

After first idea of french toast I shifted towards the bread pudding as seriously couldn’t be bother to fry anything when feeling like shit. Made buttermilk sauce with egg, sugar and cinnamon and added handful of raisins. After 20 minutes in the oven what came out was light and fluffy and very comforting. Found it a perfect breakfest and perfect treat. 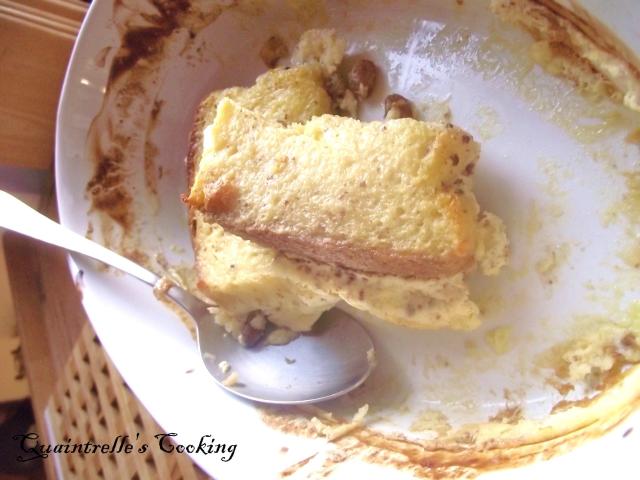 I think that at the end it was more frech toast which got baked instead of being fried, because the slices of bread got soaked in buttermilk and egg mix and then just baked in that mix which gives the feeling of bread pudding. I didn’t use heavy cream or butter, so the dish remains light and very fluffy.

In the baking dish whisk together buttermilk and egg, add sugar, cinnamon and vanilla and give it a good whisk. Now soak the bread in, turn it so it coats and soaks evenly. Then put it with the sauce into the oven and bake in preheated to 200C for about 20-25mins

I'm a redhair girl witch to some scientist to the others... I love cooking and baking.... what else would you like to know?
View all posts by ladymorgiana →
This entry was posted in baking, bread, bread pudding, breakfast, brioche, buttermilk, casserole, challa bread, cinnamon, french toast, raisins and tagged bread pudding, brioche, buttermilk, challa bread, french toast. Bookmark the permalink.

2 Responses to Pudding The French Toast?